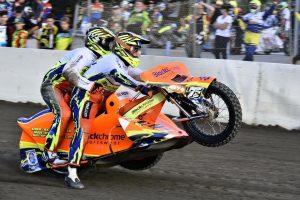 Plaisted and Pitt will start as one of the favourites to take out the Inaugural Gates Sidecar Cup in the sidecar compartment of the 70th anniversary meeting.

Plaisted and Pitt join Byren Gates and Michael O’Loughlin, Neale Hancock and Brendan Johnson and Clint Mayes and Sean Coleby as confirmed starters for the Gates Sidecar Cup with more announcements made in the next few weeks  .

There will be a 70th Anniversary dinner at the Coomealla Memorial Sporting Club Dareton on Monday the 6th of November where champions from today and yesteryear will be on stage plus a race jacket auction.

For more information regarding the event please visit www.milduramotorycleclub.org.au